Lesley Davis moved to the town of Montezuma, Colorado, 20 years ago, when she was 22 years old. Montezuma is a small town by any standards, with only about 75 residents as of 2020, but it is an extremely scenic one, with easy access to backcountry skiing, biking, snowmobiling, snowshoeing, and hiking. It’s no surprise that a young person with an interest in growing cannabis and who loved the outdoors would have considered this place for settling down back then. Davis grew up in St. Louis, Missouri, went to college at the University of Miami in Ohio, and moved to Colorado in 2001. “I found my dream home at an early age and have been loving living in Montezuma ever since,” Davis says. “We are surrounded by national forests and are just a few miles away from multiple ski resorts.”

Today she lives in Montezuma with her husband, Jay, and their canine child, Willow. Lesley is the master grower and owner at The Mountain Orchid, and she says they have created a strong sense of community with their neighbors. That’s a good quality for someone like her, because she is not just a cannabis grower but also the Mayor of Montezuma. 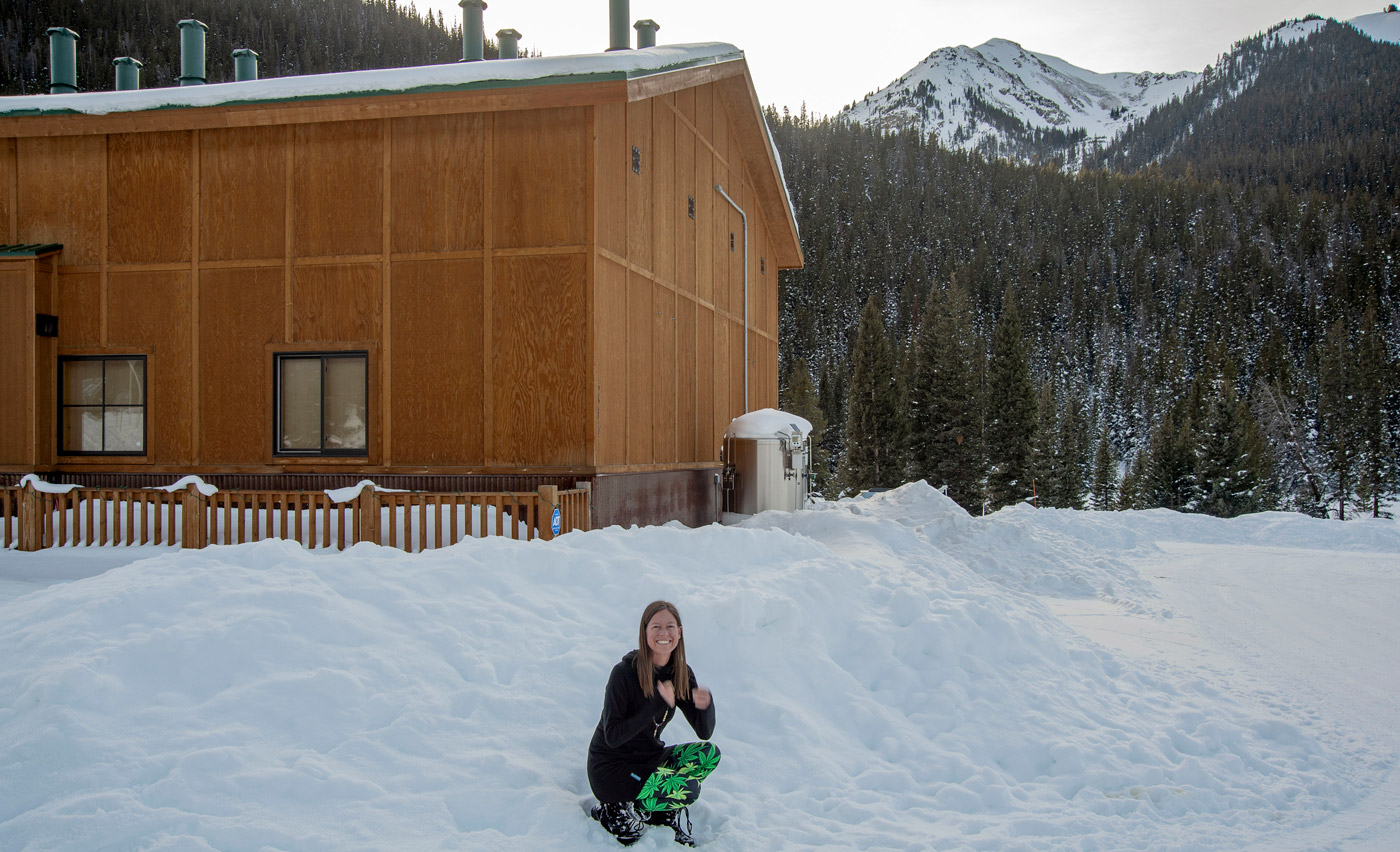 The “Highest” of All Mayors

When Lesley moved to Montezuma, medical cannabis had just become legalized, but she says it was still very taboo. “I had always loved horticulture and thought growing cannabis would be an amazing experience,” she says. “However, our town’s leadership was older and still very conservative.” Later, when recreational cannabis became legalized in 2012, she says she knew the town government had to change.

“I started speaking to neighbors about how to accept this change in social norms and industries and I found that most of the people I talked to agreed with me,” she says. “The people controlling our town who didn’t want to accept the change in cannabis as an industry were the minority. I found that the majority of Montezuma’s residents saw the many benefits of cannabis and wanted our town to be welcome to this new industry. This encouraged me to create a political party called 365, and I started to rally support for change in Montezuma.”

She not only created the party but was elected Mayor in 2014. The main goal of 365 was to create what she calls “Zumtopia,” which sought to allow the town to follow state laws concerning cannabis without any additional regulations. But cannabis opposition wasn’t the only thing she would have to face — one month after her election an emergency happened when an unexpected spring flood washed out the only road in and out of town. “I was the last to evacuate since I was the Mayor, then came all the arrangements to meet with the emergency teams,” she says. “Then I went back to town on foot with a radio to help out the residents who chose not to evacuate with their needs.”

After surviving that ordeal, she says it finally does feel like they live in Zumtopia. “The town board is in full support of this amazing new industry and our community has never been stronger,” she says. “Montezuma is located above 10,000 feet, so we are one the highest incorporated towns in the United States, so technically, I am the highest Mayor in the country!” 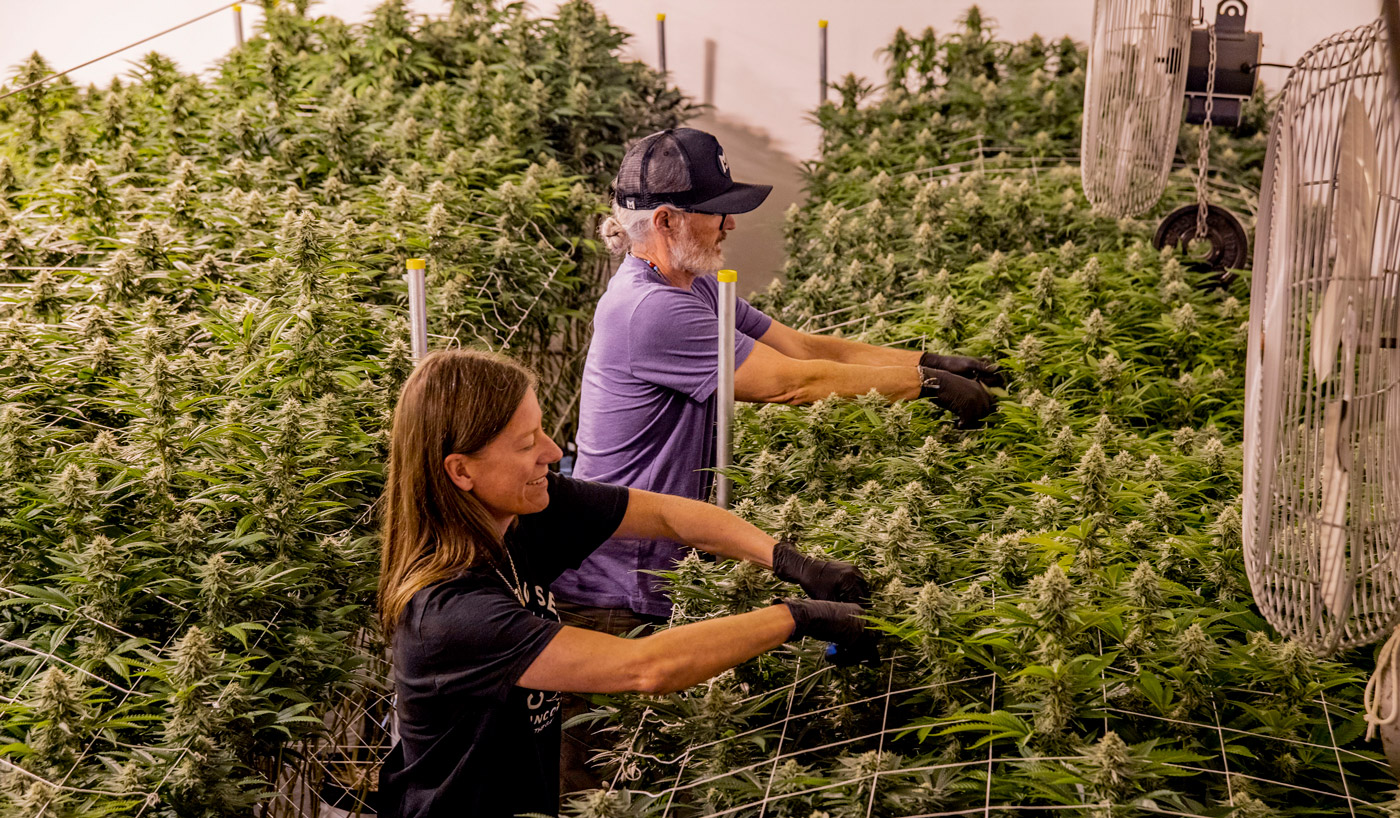 About The Mountain Orchid

The Mountain Orchid is a small, boutique recreational cannabis cultivation facility that is one of the highest cannabis cultivation facilities in the country. “We use nothing but the purest water, freshest air, and highest quality supplements for our plants,” says Davis. “Even though we are away from big-time civilization, we act as if our facility is a scientific lab and keep the strictest cleaning protocols.” (Lesley has a bachelor of science degree in chemistry.)

The name “The Mountain Orchid” came about because while growing up, Lesley’s mother had more than 200 orchids and numerous other plants in greenhouses. “I have been surrounded by plants my entire life,” Lesley says.

The couple planted their first seeds on 4/20/2020. They have two bloom rooms with 20 lights each and one vegetative room. Lesley’s growing medium of choice is Plagron Terra Premium soil and coco and she uses the New Millenium nutrient line. The Davises believe there is much more involved in raising a healthy plant than just soil, water, and light. This leads them to follow some less common practices, such as following the lunar cycle by planting and harvesting at auspicious times, continuously playing Ayurvedic chants to promote plant growth, and connecting with their plants by constant hands-on treatment. They harness crystal energy, pay attention to astrology, and in general channel positive vibrations to their plants in every way.

“We are a small operation and I like being small because that means I can personally connect with each plant,” Davis says. “We use Dutch Lighting Innovation’s 1000-watt double ended HPS bulbs in our bloom rooms. We stagger HPS and metal halide bulbs in our veg room, which has 12 lights total, plus three LED veg lights for the cloners and mothers.” 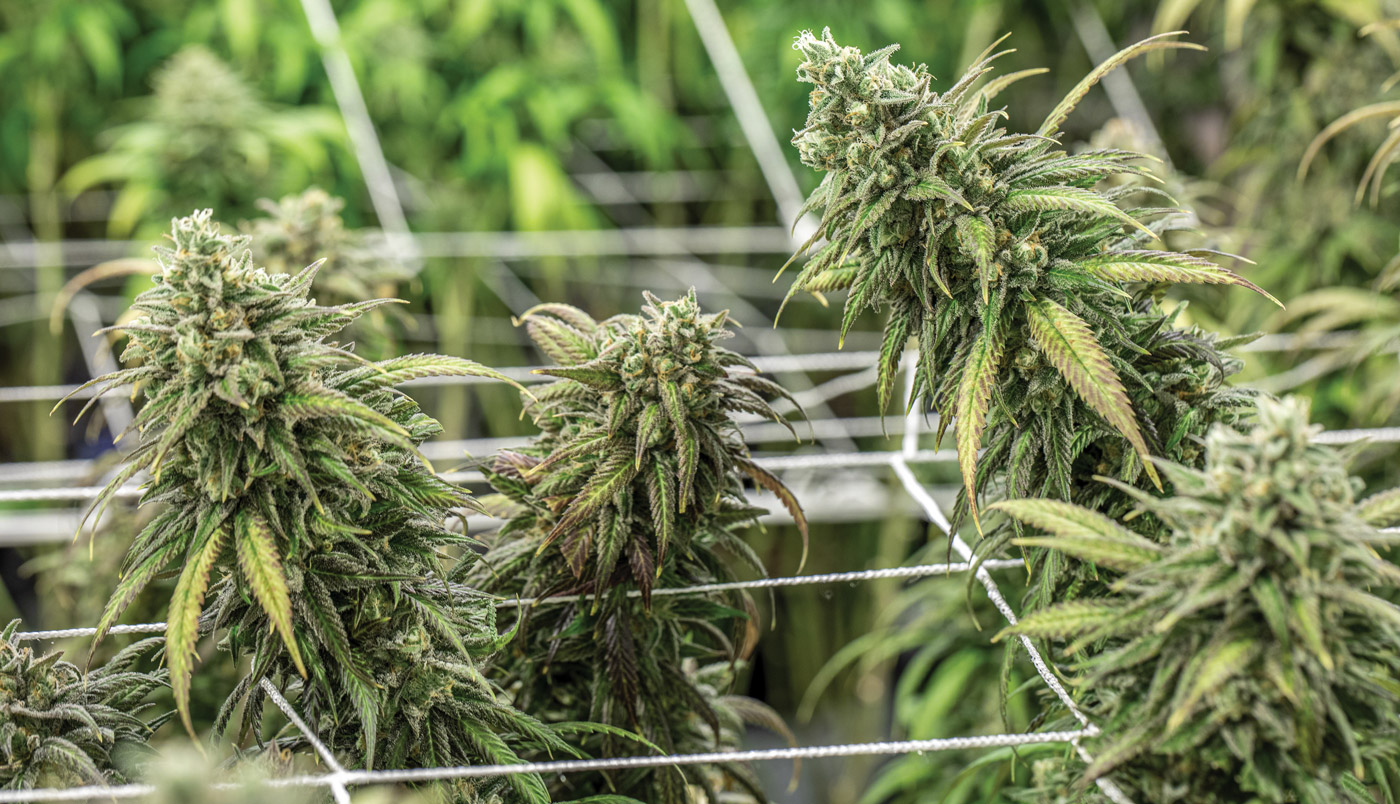 The Healing Power Of Cannabis

Lesley got her Colorado medical card in 2009 because she has an autoimmune deficiency called Raynaud’s Phenomenon, which causes the nerves in her hands and feet to seize, restricting blood flow to those extremities. She became a caregiver in the state and began growing for patients as well as herself. Cannabis improves her blood flow and increases circulation.

“Once I realized how beneficial cannabis was, I knew that growing my own was the best way to go so that I could know what was being used to grow it,” she says. “I’m very health conscious and it concerned me to not know how other people were growing the medicine that myself and others were using.”

A few years ago, Davis shattered her leg while skiing, breaking her tibia and fibula in eight places. The ordeal required surgery to reconstruct her leg using a metal rod and screws and more than six months of crutches. Naturally, doctors prescribed her oxycodone and other pain medications. But Davis didn’t like how they affected her. “I used them for almost two weeks but at that point it really wasn’t about my injury anymore,” she says. “I felt them affecting my dreams, moods, and emotions, and I immediately stopped using them and began supplementing with cannabis. That was one of the best decisions of my life.”

She felt her body begin to heal itself without the heavy hammer of opioids. Sleeping was difficult because she couldn’t change position, but edibles helped her relax enough to get the sleep she needed. She also used CBD tinctures and smoked dried flower. Each aspect of cannabis helped by relaxing her, helping her sleep, and keeping her spirits up. 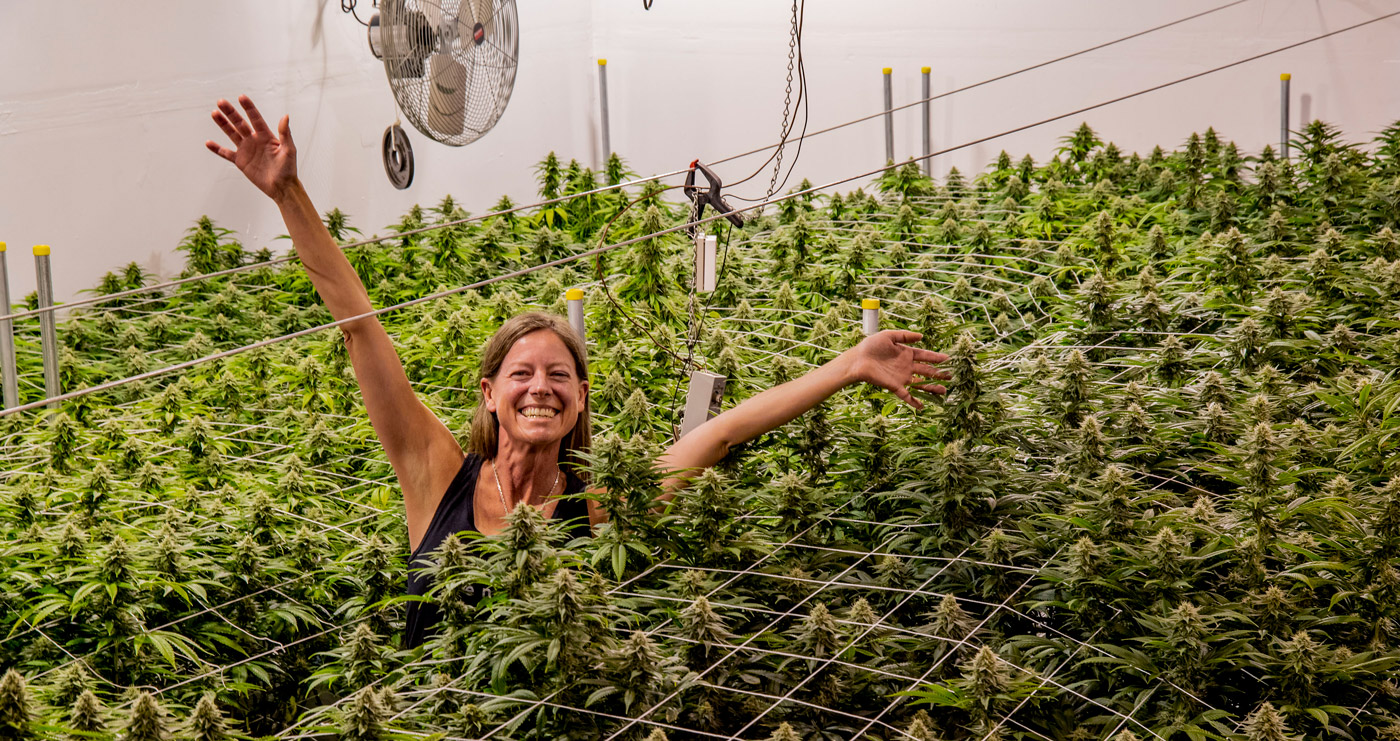 Like many people growing up in the 1970s and 80s, Lesley heard a message of cannabis being a dangerous “gateway drug” that would turn users into a vegetable. That’s something that many people grow up hearing from a young age, but at some point we realize it’s just not true and that we have an opportunity to benefit from responsible use of the plant. Lesley had that realization pretty early on when her older sister took her to a Grateful Dead concert. “That Dead show was life changing,” Lesley says. “I realized that there was an open-minded and accepting community of people who were living a lifestyle that I could relate to and appreciate. I love how music and cannabis can go hand in hand and I also really appreciate that ‘euphoric’ feeling cannabis can give you, especially in a social setting where you are sharing some good experiences.”

After she moved to Montezuma, festivities included the “Cannalympics.” “We would set up a series of games/events and had an intricate scoring system that would award a gold, silver, and bronze medal every year,” she says.

Lesley has maintained the theme of music and cannabis by having different professional musicians name each harvest batch, similar to vintages. She started by having musician, Keller Williams, play a surprise concert in the garden during Covid. He named the first harvest batch Lovesong. They  continued with that theme by having the following musicians name each harvest: Chris Pandolfi (Infamous Stringdusters) named his harvest Flagship, Andy Thorn (Leftover Salmon) named his harvest Bear Jerr’s Blend, Andy Hall’s (Infamous Stringdusters) harvest was Ambience, Dave Watts (The Motet) was Katharsis, Mark Levy (Circles Around the Sun) named his Smiles Around The Sun, Paul Hoffman (Greensky Bluegrass) named his La Buenda Vida, and Jeremy Garrett (Infamous Stringdusters) named his Oracle. The Davises play both live and recorded music for the plants 24/7.

“The Mountain Orchid buds are not only infused with love, but the sounds of each of these musicians and their bands,” Lesley says.

Lesley says their location at 10,500 feet, their pure air and pure water, and their attention to each plant helps produce the cleanest, purest flower and concentrates that it’s possible to make.  “Because it’s so cold here, we don’t get a lot of pests and we don’t need air conditioners.”

Lesley feels in her bones that Cannabis is a magical plant, and hopes that more women will embrace both using it beneficially and growing it. “Don’t be scared of it!” Lesley says. “Learn about it so you can use it safely and responsibly, but don’t buy into the stigmas and insecurities. The right cultivar that has the effects you need can help you relax, sleep, connect with nature, enjoy an activity, or just make you feel good and calm.”

Many women can benefit from the nurturing act of growing plants, no matter what else is going on in their lives. “You can get some real benefits from plant therapy, especially during difficult times,” says Lesley. “Having a plant to care for is so rewarding. The more love you give it, the more it returns.”