Beautiful Glass with a Scientific Heart

It took a few months for glass artist Chris Chippari and I to connect on the phone. His small crew in Santa Monica, California, had been hit by Covid. With his team consisting only of himself, another primary glass blower, and two apprentices with limited mastery, work got severely backed up whenever someone couldn’t be there. That small team creates some of the most unique glassware on the planet — functional and beautiful, with design elements exclusive to them.

For about 15 years, Chippari worked for well-known glass pipe company Zob, doing sales, leading their research and development team, and managing the production floor. As the years went by, Chippari became more experienced and more convinced that he could lead his own company to similar or greater success. “I wanted to go in a different direction with some ideas that I had that weren’t right for this company,” Chippari says. “I left in 2018 and started building my own shop.”

MOLTN launched in April 2021, so you can be forgiven if you haven’t heard of it. But once you have seen their pieces, and felt them in action, you won’t forget. “I want to focus on affordability, but also on quality,” he says. “I felt we could make a really high quality product that’s also pretty affordable as far as glass is concerned.”

Chippari tried a bunch of different types of pipes when he was young, but not much glass. Until a friend came back from a Grateful Dead show in 1991 with a color-changing pipe made by Eugene, Oregon’s master of glass, Bob Snodgrass. “I fell in love with it,” Chippari recalls. “I was like, wow, I’ve never seen anything like that before, really cool stuff.” 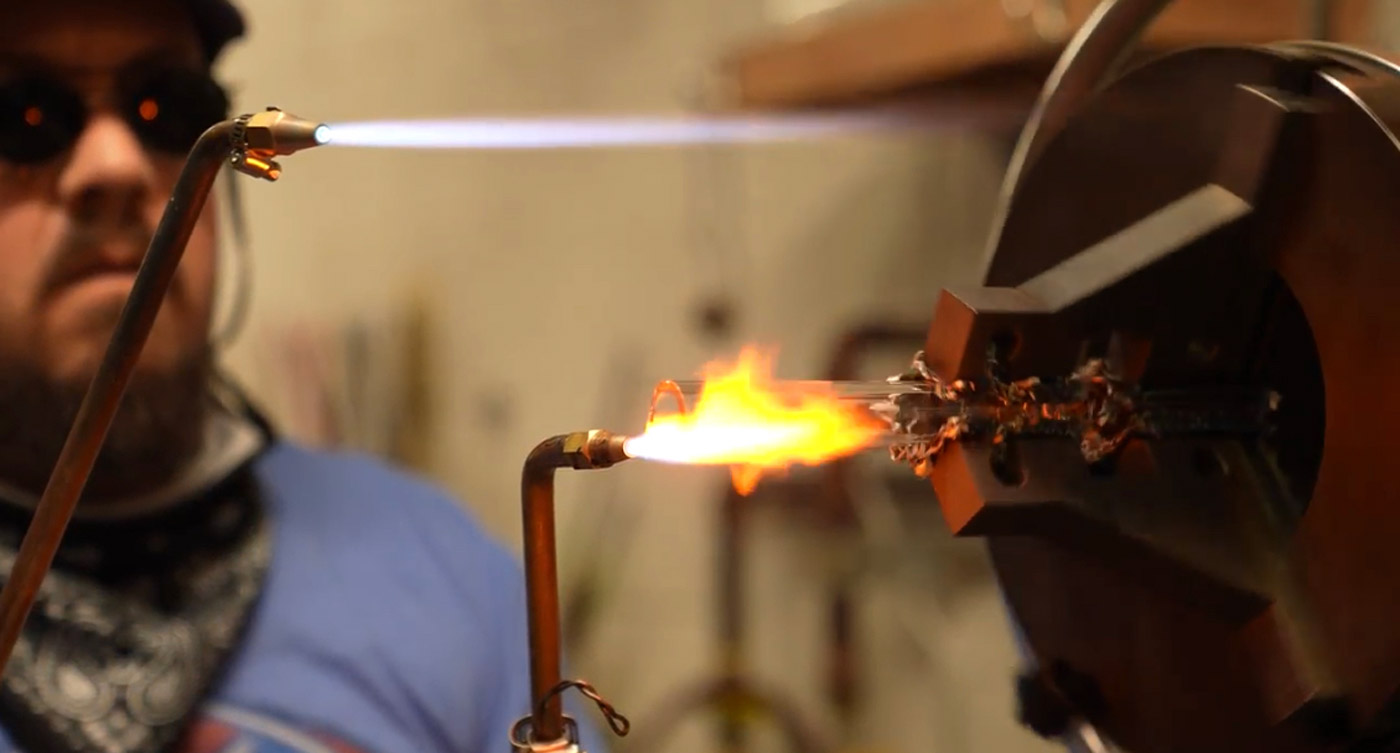 This was when Chippari was in high school, and other people in his friend group were planning what colleges they would go to. Not him. “I just told myself one night, ‘You know what, I’m gonna learn how to blow glass. I just decided.”

It wasn’t that unusual for him to decide on a creative path instead of academics, because he says he was always the type of person who was sketching, drawing, or painting. But glass was satisfying and functional in a way that drawing or painting couldn’t be. “I was never really happy with the finished results of the art that I created, until I started blowing glass,” he says. “That’s when I was like, wow, this is really cool. You end up with a cool pipe that people enjoy smoking out of and they look good.” 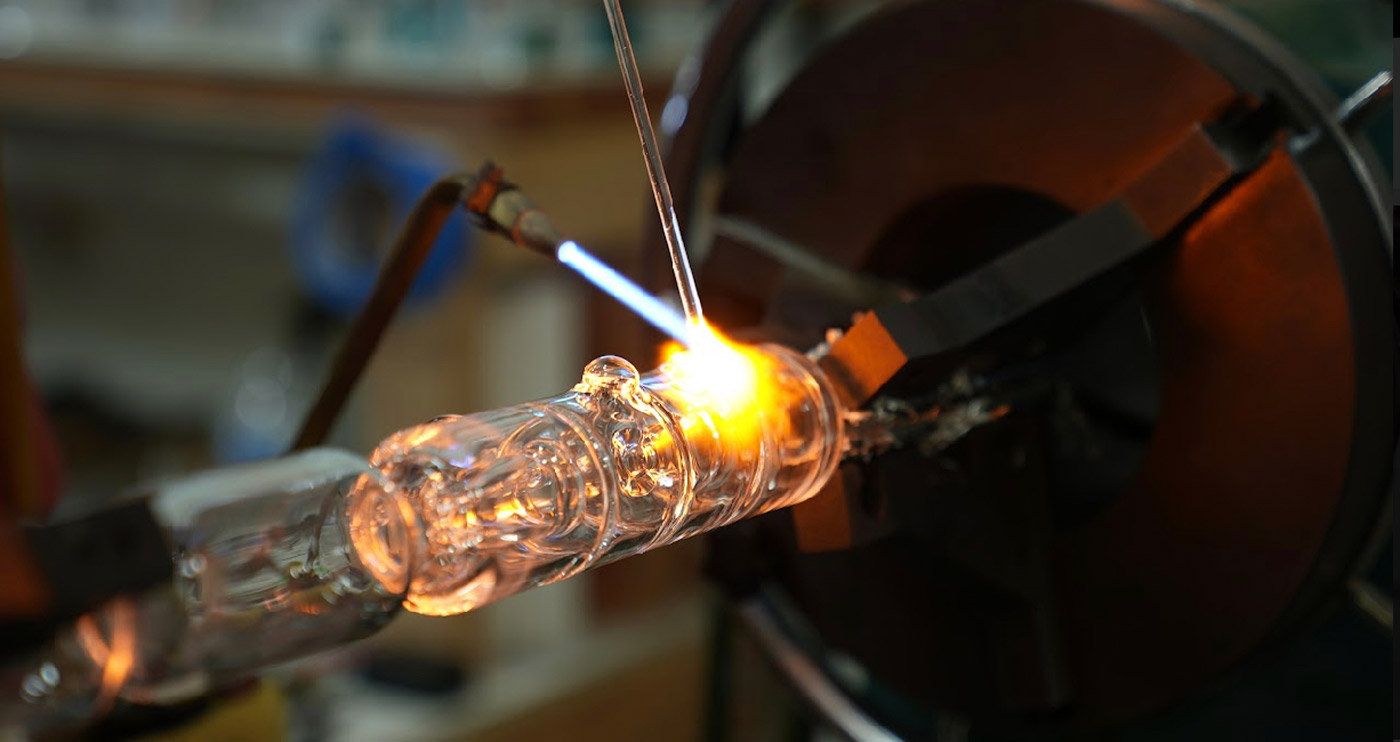 Chippari grew up in New Hampshire, where he was introduced to cannabis at a fairly young age. After making the decision to pursue glass creatively, in 1996, Chippari moved to California and “went for it.” In Cali, he took some glassblowing classes at Santa Monica’s community college along with a couple of other classes at Rancho Santiago College in Santa Ana. He met some other glassblowers with similar interests. “We got some torches, got some kilns, and basically started setting up in either one guy’s garage or another guy’s garage and we all pretty much taught ourselves how to make pipes,” he recalls.

By the late ’90s, he and his crew were making inside out pipes, bubblers, double bubblers, and chillums and selling them across Venice Beach. Those were successful days, until Operation Pipe Dreams happened in 2003. Operation Pipe Dreams was a large-scale federal investigation targeting businesses selling pipes and bongs. Hundreds of businesses and homes were raided, including the home of glass artist Jerome Baker. The actor Tommy Chong was charged and sentenced for financing and promoting a glass company started by his son. “After the shops were raided they all closed because they didn’t know what was going to happen or if they legally could be open,” Chippari recalls. “The future was in limbo back then. We were kind of outlaws. It’s a lot easier now.” 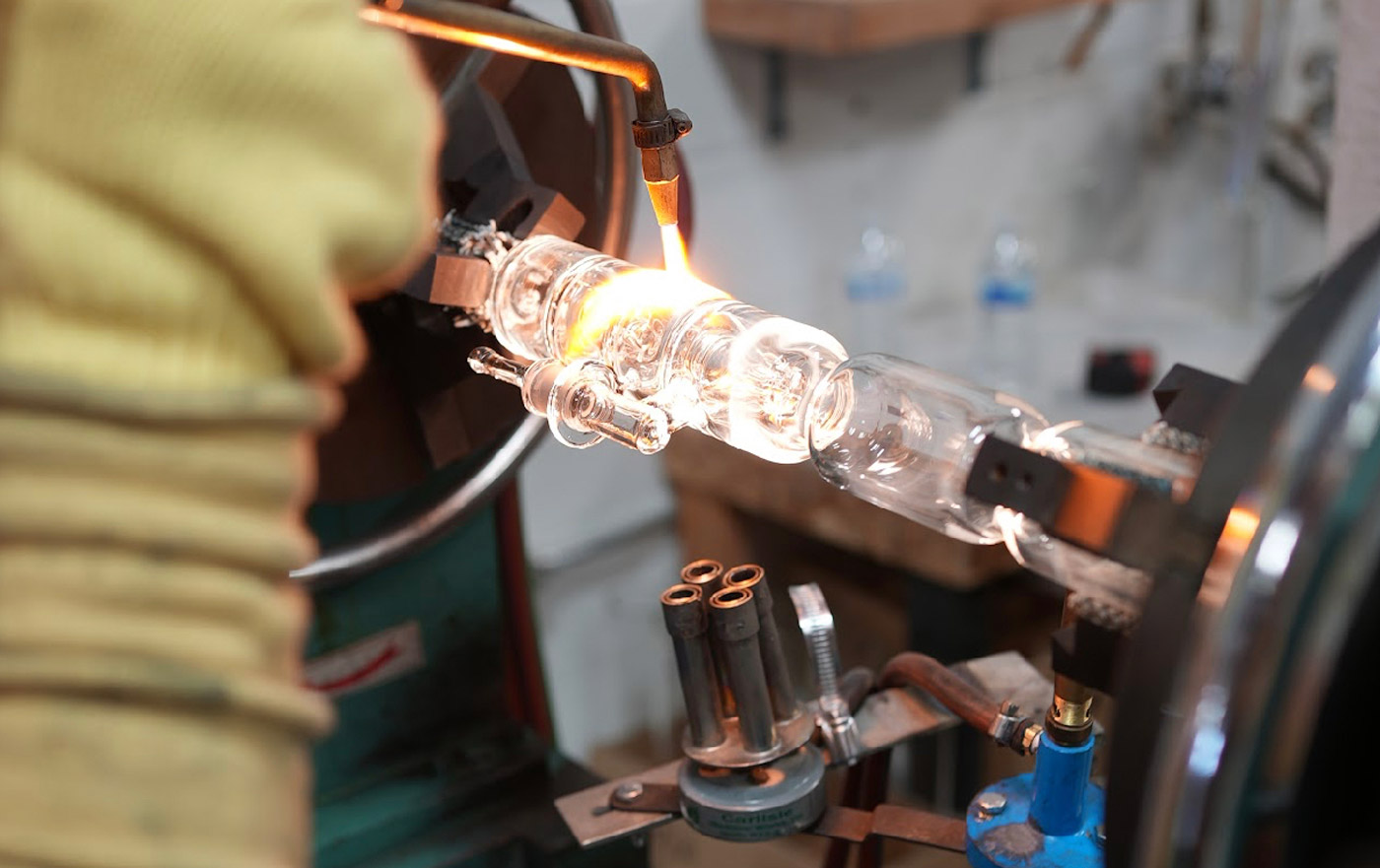 At that time, possession of a pipe, even if it hadn’t been used, could have gotten you in trouble. After the investigation debacle, Chippari began focusing on the scientific aspects of glassblowing. Chippari graduated from using a torch and his hands to using a lathe. “That company, Glass Tech in Fullerton, taught me how to use more scientific applications as opposed to just taking random rods of color and sticking them inside clear glass,” he says. “We learned more about things like annealing and the  different scientific processes of actually assembling glass. I only had one torch before and there I learned how to use different types of torches. When you start doing more scientific stuff, you realize that you need multiple torches because different torches have different applications.”

Today, MOLTN’s trademark techniques create a look as clean and linear as any laboratory equipment. Features like ash catchers integrated into a bong’s stem, a recursive nested pipe design, a “mug handle” that circulates the smoke, and a 360° disc around the bowl make his pieces so pleasing to use.

Chippari says he appreciates function most of all. “I like something that works really well with a lot of diffusion and filtration,” he says. “I have a really fun time with that. The research and development phase of it’s really fun. It’s frustrating, but it’s really fun.”

The designs start with a sketch, and lots of measurements and calculations to see if it might work. You can’t tell how well a design will work until you actually make it, he says. And it’s all about the flow of air. “You’re pulling air through glass and water,” he says. “So you have to follow the flow of the air and figure out exactly where it’s going, how much water you’re going to be using, the volume of air on the inside of the piece. There’s kind of a lot that goes into it.”

“What I did was I took all the previous techniques I knew and added some more advanced techniques so that I could make the pieces more sturdy,” Chippari says. “That’s one of the things I really focused on with MOLTN,  to make each piece as structurally sound as I could. There are no real weak points in the glass. That’s the worst . . . to bring a piece home and bump it on something and the inside falls apart. I made it so that you can really feel the sturdiness and quality when you hold one of these pieces in your hand.”

Each of MOLTN’s models are made from the highest quality German-made borosilicate glass and come in three sizes: a small chamber, a medium chamber, and a tall chamber. The pieces don’t increase in height, however, but the chambers are designed to get taller to hold a greater volume of smoke in each one. “The 110 millimeter pieces are only 18 inches tall, but the tall chamber piece holds the volume equivalent of a six-and-a-half-foot bong rip,” he says. “The next smaller one is five and a half and the one below that is four and a half.”

MOLTN’s glass is very clean and mostly clear. But they are starting to do collaborations with people who implement a little more color, including Mike Fro, known for his colored linework; Sherbet, who is known for wavy pencil dabbers; and DWreck, who often makes cool glass pendants. Keep your eyes peeled for a collaboration with Grow Magazine in the future!

Chris Chippari’s skill with glass has grown right alongside the changes to the industry. When blowing glass in your garage was once an “outlaw” thing to do, it’s now something that’s not hidden. Possession of a piece was something that was once kept hidden as much as possible, and often small, just so that they could more easily be hidden. Now, pieces like those made by MOLTN are considered art objects and left out to be admired.

“When I first started blowing glass and making pipes my mother was afraid to tell her friends what I did,” he says. “Now she brags about how I’m a glassblower and the cool stuff I make. I like that it’s so much more acceptable socially now.”

If you are lucky enough to purchase one of these beauties made by Chippari, you’ll want to brag too. You definitely won’t want to hide it away. MOLTN can make only about 100 pieces a month, so when you get one of these, it truly can be considered a collector’s item.

A Review of Modern Greenhouses