There are certain stories in each culture that need to be passed down, revered, and repeated, like a legend or fairytale. This is one of those tales. This story is about one of the original pioneers of pot, Steve Kubby, and how he came to patent what he believed the future would be.

Kubby was born in the somewhat-sleepy town of El Paso, Texas, in 1946, and raised in the definitely-not-sleepy hub of Los Angeles, California. His young mind quickly adapted to the task of navigating a world torn by war and politics, and he busied himself with pursuing a degree in psychology while later becoming a probation officer and co-founding a youth summer empowerment program, Earth Camp One, which focused on improving kids’ mental health.

In 1967, at age 21, he was diagnosed with a rare adrenal gland cancer called pheochromocytoma. Through research, he came to realize that cannabis could help the extreme discomfort he was forced to live with, and he dove headfirst into the use and advocacy of a plant that his life’s work would thereafter be based upon.

Each day, his mind and heart raced at the injustices of humanity, exacerbated by political corruption and unfair treatment of patients in need of access to medical marijuana. He would spend endless days and nights learning how to cultivate Cannabis and educating on laws that he knew he constantly had to contend with. Over the years, his grows evolved from using a simple light bulb in a closet to full-on multiple-light cultivation spaces. He honed his medical plant skills, while simultaneously hustling to create planned actions that could help educate people around him, while also creating his topicals and later patented infused lozenges.

1991 came around and he could stay silent no more. Kubby took his research and put it into his debut book Politics of Consciousness: A Practical Guide to Personal Freedom.  He connected with like-minded advocates in the cannabis and psychedelic medicine space. His admiration for conscious creators such as Terence McKenna, Jack Herer, and Timothy Leary led him to a magical adventure with the infamous Mr. Leary that forever altered his perspectives of existence. (I am quite sure a week with Leary would alter anyone!).

In his book, Kubby seamlessly bridges the gaps of mentality and politics, using his advocacy for freedom, his knowledge of political rights, and passion for plant medicine and consciousness to create a revolution of thinking — freeing the mind from mental slavery and recapturing a needed campaign for political revolution and how prohibition has truly caused irrefutable damage to society.

The Need For Weed

Without large, consistent amounts of illegal “weed,” Kubby found no relief from the cancers and illnesses that constantly attacked his body. By continuously smoking, eating, and applying topicals with vigilance he was eventually able to put the big C into remission. He used fresh frozen plant matter that contained full spectrum, high-quality, organic rosins and continues to use what at that time was a highly illegal quantity of cannabis.  That fight to gain access to the only thing that could help him survive, brought him to join the campaign for the War on Drugs. Partnering with others such as Herer, Chris Conrad, and Ed Rosenthal in movements led by legend Dennis Peron (Peron, who died in 2018, became a leader in the movement for the legalization of cannabis, especially in California, throughout the 1990s). Kubby used his ferocious need for medical access to advocate and help sway grassroots efforts toward political campaigns, setting forth a domino effect of awareness that continues to echo and set precedence to this day.

But that was all just fuel for Steve Kubby’s fire. With friends such as Cheech Marin, he continued deepening his involvement with legislative change. In 1998 he was in the running as a candidate for governor of California for the Libertarian Party. He unfortunately wasn’t chosen (no one was quite ready for a progressive mind like his), but he kept fighting in many ways, educating all aspects and sectors, while attempting to grow businesses that would continuously inspire.

He again was raided and busted for cultivating his own medical marijuana and through an arduous jury trial was granted a mistrial using Proposition 215 as a legal defense for his 220 cannabis plants. This legal defense set a precedent for many future cases. Unfortunately, he was penalized for the peyote and Psilocybin he had in possession, but it became more kindling for the flames of freedom fury that he so ardently fought for. He subsequently moved to Canada to become a Pot TV anchor while pursuing plant medicinal freedom in other countries. Again, his home was raided, and he faced further persecution and was extradited back to California to battle incarceration.

With his endless dedication, 1996 came around and he had successfully co-authored a book with Ed Rosenthal entitled Why Marijuana Should Be Legal. The book is an in- depth analysis of the effects of prohibition and marijuana on society. Within its pages the two authors address the plant’s medicinal and commercial industrial applications as well as info about preserving our constitutional rights, economic costs, health effects, and social integration. To this day, this is much needed literature in our libraries. 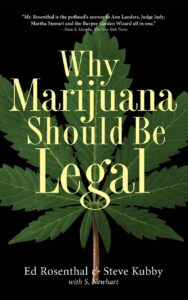 Kubby continued his adventures in other countries, even having the opportunity at one point to assist Senator Nelson of the U.S. Virgin Islands to better understand the drafting of memorandums for future medicinal Cannabis laws.

In 2008, Kubby raised the bar and ran for President of the United States of America, lobbying for medicinal cannabis rights and freedoms of choice. Again, decisions were overturned by those in a mainstream power, but the priceless speeches and revolutionary thinking that was delivered during that time by him remain imprinted in the political societies as days of enlightenment, education, and change.

With impending commercialization of cannabis becoming more and more apparent at that time, this gentleman used his years of knowledge and wisdom about cultivation and medicine-making to start what would later become a furious rush of those clamoring to obtain intellectual property rights.

In 2010, Kubby filed federal patents to protect his genetics, named Celestial Temple Sativa, and the company, Kubby Cryogenics. Kubby Cryogenics wanted to patent medical-grade cannabis strains that are genetically profiled to treat specific diseases (Grow learned after press time that the company had been sold). At the same time, he also filed a partnering patent for an edible lozenge that contained THC for medicinal patients to alleviate hypertension issues. Both patents were granted after years of battling, and he was later able to license and sell them both to a publicly traded company, while retaining rights to grow at home.

His passionate journey with Cannabis in this lifetime has led multitudes of humans to new ways of thinking and broken political grounds that were unfounded before his time.  Without true political, entrepreneurial, and medicinal advocates such as him, we would have never had the path paved to recreational cannabis that we are enjoying in the present. The vigilance he has brought to the cannabis on the world stage has inspired me as well as the entire marijuana movement; it’s a testament to why his words are referenced in more than one history book in the world.

Now, at age 75, Steve Kubby continues to live with his cancer in remission in the mountain town of Lake Tahoe, battling only the occasional seizure as long as plenty of ganja is around to ingest. Here he can smoke with safety and security, reminisce about skiing the luminous slopes, and how he helped change the world with his beautiful wife and dedicated partner Nobia Kubby.

As I have been blessed with the opportunity to smoke a few and make some edibles with this legendary human, there is not a day that he doesn’t remind me how important each day is and how imperative it is to live with the freedom to make our own choices, to innovate our industry, and stand tall as an advocate of thought and wellbeing. His cultivar is again up and growing as we get ready for yet another season of “overgrowing” the government, one plant, one patent, one patient at a time.

Steve Kubby is living proof that regulations only benefit a few and they leave real cannabis patients set back a quarter of a century and again at the mercy of Big Pharma. Don’t forget the ones who paved the way.